Chronic Pain Patients Will Rally Across the U.S. to Protest Limits on Opioid Prescriptions

On Saturday, April 7, people with chronic pain will rally across the U.S. to protest the federal changes to limit opioid prescriptions for those who have chronic pain. The rally’s mission is to provide a way for chronic pain patients to be heard and educate the public on the difference between prescribed opioid medications and illicit drugs.

The Don’t Punish Pain Rally cites the 2016 guidelines from the Centers for Disease Control and Prevention as the start of leaving “millions who suffer from chronic illnesses…’homeless’ in the medical community,” according to the rally’s press release.

The CDC said the guidelines were made to ensure chronic pain patients had access to “safer” and “more effective” treatment. In 2016, the CDC estimated that 32,445 people died overdosing on a prescribed opioid. Last March, researchers from the CDC said that deaths from prescription opioids were largely blown out of proportion, cutting this number down to almost 17,000.

The guidelines from the CDC were partly in response to the opioid crisis. On average, 115 Americans die each day from opioid overdose. The CDC gives 12 recommendations when prescribing opioids. Among them are: not using them as a first line of therapy, testing levels of the drug in patients’ urine, and prescribing immediate-release opioids, which only provides pain relief for a short duration.

Since the guidelines were released, some doctors and prescribers have been charged with crimes related to prescribing opioids, which the rally’s organizers said has caused some doctors to stop prescribing them. Their press release states:

President Trump declared the opioid crisis a national emergency and a public health emergency in 2017. His administration has started to crack down on opioid prescriptions in an attempt to limit abuse. Studies examining the percentage of patients who become addicted to opioids vary. One study states less than 1 percent of those taking opioids long-term develop an addiction. Another said 8 to 12 percent of people with chronic pain develop an addiction but claimed misuse averages between 21 to 29 percent.

Rallies to protest these changes and the CDC guidelines will take place in 47 states. Most rallies will be held at capitol buildings. Each state and location can be found below from the rally’s Facebook page: 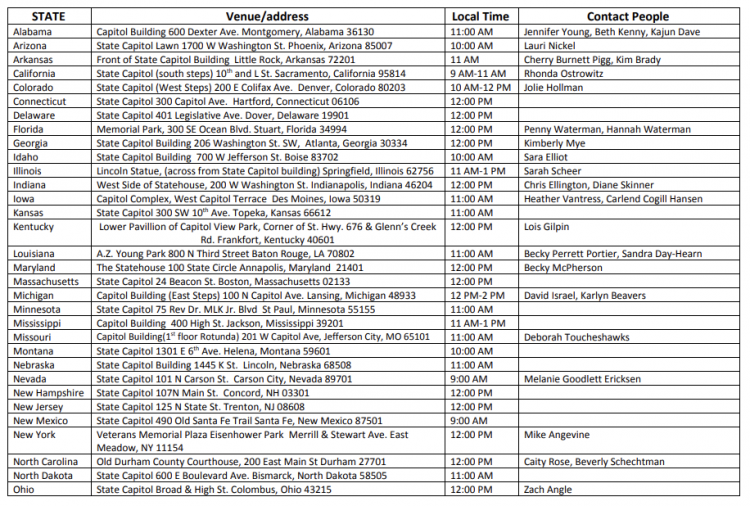 Previous When You Destroyed Me Emotionally, I Became A Better Person. Thank You For That
Next My Borderline Personality Disorder Makes Me Feel ‘Too Much’ All the Time