A man has been imprisoned for decades after a marijuana sale. The state’s top attorney says it’s time he’s released

Michael Thompson has been in prison for 24 years, serving what his attorneys say is essentially “a death sentence.”

The 69-year-old was convicted in the late 1990s following a marijuana sale that spurred a search in his home, where officials found weapons. Due to prior convictions, the judge handed Thompson a decades-long sentence for drug and weapon-related charges, one that advocates say is both harsh and disproportionate to the crime. His earliest possible release date is 2038.
With now an army of supporters behind him pushing for a commuted sentence — including Michigan’s attorney general — Thompson’s family hopes he could be a free man sooner than that. It will give him the chance to spend time with the grandchildren and great-grandchildren he’s never met, his daughter says.
But Thompson was transferred to a medical facility after testing positive for coronavirus earlier this month and suffers from diabetes and other health conditions that his daughter fears could take away her father’s chance to return home.
“I don’t want it to be a call that comes through and they say it was too late,” Rashawnda Littles said. “Covid don’t have a grace period.” 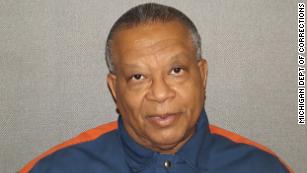 A photo of Michael Thompson from the Michigan Department of Corrections.
Thompson’s attorney, Kimberly Corral, has filed a petition for clemency and this week, the state’s parole board is set to kick off the process leading up to its recommendation, the attorney’s office said. That recommendation will land on Gov. Gretchen Whitmer’s desk, who will have the final say on Thompson’s case. A previous petition was denied by then-Gov. Rick Snyder in 2018 — the same year recreational marijuana was legalized in Michigan.
Hundreds of advocates are on Thompson’s side and have called for an earlier release in the past, including Chelsea Handler, Shaun King, Ava DuVernay and Kim Kardashian, who wrote a letter in support of a commutation. Many have pointed to his exemplary record in prison and argued Thompson never committed any violent crimes or ever posed a threat to his community.
“This case represents everything that’s wrong with our criminal justice system. We have a Black American who has been sentenced to an absolutely ridiculous sentence, a disproportionate sentence,” said Joseph Patituce, a managing partner of the firm representing Thompson.
“Today, his sentence is a sentence that’s reserved for the worst of the worst.”

‘We don’t see sentences like that typically any more’

The sentence Thompson is serving stems from a marijuana sale, according to the clemency petition provided to CNN by Thompson’s attorneys.
Thompson sold about three pounds of marijuana to a police informant and when authorities searched his home, they found 14 weapons, according to the petition. Nine of the weapons, which included antiques, were inside a locked gun safe and Thompson’s wife testified at trial that most of the guns were hers, the petition states. 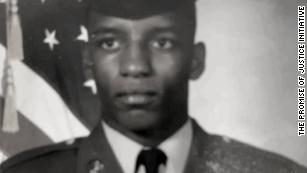 A man who was sentenced to life in prison for selling $30 of marijuana will be freed
Because of his previous felony drug convictions, the judge handed Thompson up to 15 years for each of the three drug charges and a staggering 42 to 60 years for firearm possession charges.
“The sentence imposed on Mr. Thompson is the product of a different time in Michigan legal history,” Michigan Attorney General Dana Nessel wrote in an August 5 letter to the governor. “And it is a time that has passed.”
If it weren’t for the weapon charges, according to the state’s top attorney, Thompson would have completed his marijuana-related sentences in March of 2011.
According to the Michigan Department of Corrections website, Thompson has already served the time of the drug-related charges in his sentencing and is still behind bars for the weapons charges.
“The gun thing is really the one you really scratch your head and go ‘really?'” says Chris Gautz, a spokesman for the corrections department. “That was a very long sentence and we don’t see sentences like that typically any more.”
The attorney general says behind that unusually long sentence is the state’s habitual offender law, which allows judges to enhance the sentences of those with prior felonies — and in Thompson’s case, could have meant up to a life sentence. Thompson’s previous offenses were all non-violent.
Habitual offender laws, still in effect across the US, have multiplied the sentences of hundreds of offenders, many of whom are non-violent, like Thompson. In Michigan, habitual offenders can face sentences enhanced by up to 100%, according to Safe and Just Michigan.
That law, the state’s attorney general said in her letter, gave Thompson’s judge “virtually unfettered discretion” in the sentencing.

The Michigan Parole Board will begin the process toward their recommendation on August 20, according to Patituce. But the process is a long one and it will likely be months before the board reaches a decision and passes that on to the state’s leader, Gautz said.
“We’re probably three or four months away from the governor doing anything with it,” Gautz said.
CNN reached out to the governor’s office but did not hear back.
Since Thompson was incarcerated, he’s only had one ticket, Gautz said, which he called “pretty remarkable,” given the time Thompson has spent behind bars.
“That’s a very good prison record,” he said. “He’s not been a threat, he’s not been an issue in terms of having him there.”
He also has taken a class in prison, Gautz said, even though most courses are geared towards inmates who are slated to be released soon.
“He is a model prisoner,” the attorney general said in her letter. “Mr. Thompson’s actions over the course of his incarceration reveal that he will not pose a danger to the community if his sentence is commuted and he is released from prison.”
“He was never a violent offender and there is no reason to believe that Mr. Thompson will ever again engage in criminal activity.”

On many days, Littles is sporting a red T-shirt with the words “Free my Father” in big white letters, printed on top of a picture of the two of them. Thompson spent time in the Navy, she said, and was a beloved employee of General Motors and a community leader in Flint.
“My father was a good man,” she says. “He was a good family man. He loved his children. He was the type of man that he would actually give you the shirt off his back.”
A self-described “daddy’s girl,” Littles was in her early 20s when her father began his sentence. Her father has often refused family visitations since, in hopes of avoiding the most difficult part: the goodbyes. So the two have suffered through loss –Thompson’s mother and son died while he was incarcerated — and celebrated good news — the new additions to their family — all through the phone. 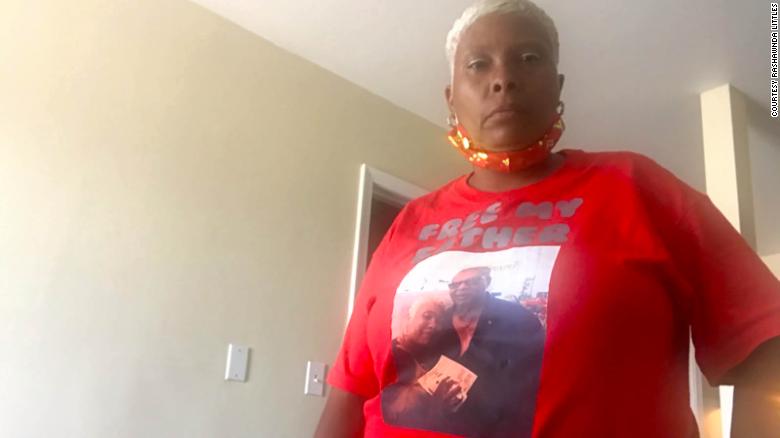 Rashawnda Littles wears a T-shirt depicting her and her father.
“I’m a firm believer that my father’s going to come home,” she says. “I’m just angry.”
It’s a sentence she still tries to make sense of, and one that’s left a deep wound on not just Thompson’s life, but Littles’ as well and their entire family.
“I made bad choices in my life, due to his incarceration,” she said. “I’m out here, seeking love and I’m seeking it in the wrong direction. Nobody can give me the same love my father gave me. That’s for certain.”
Their whole family, she says, grew apart following the sentencing. But she kept in touch with her dad, calling him almost every day, even just to say hello. Now, with her father nearing 70, she hopes he can have some time to spend with his family at home. And she’s growing more hopeful for a release following the new support that’s come in recent months.
Months before the state’s attorney general made her announcement, Genesee County Prosecutor David Leyton joined Thompson’s attorney in the clemency petition and in asking it be expedited due to coronavirus concerns.
“Even if you include Mr. Thompson’s prior convictions, which the judge did do, the sentence he received appears harsh and goes against the interests of justice and fairness,” Leyton said in a statement.
Patituce says Thompson’s attorney is also staying optimistic.
“We’re hopeful that with all the different parts of the legal system saying it’s time for him to get out, that the governor will listen and she’ll hear what we’ve asked for,” he told CNN. “And she’ll do the right thing.”
“He didn’t hurt anybody,” Patituce says. “It was three pounds of marijuana.”
Share

Marijuana Edibles Could be the Answer for Fibromyalgia