We’ve reported several times about the abuse and lack of effectiveness of gabapentin, a nerve medication increasingly prescribed to treat fibromyalgia, neuropathy and other types of chronic pain.

It turns out gabapentin is also involved in a growing number of attempted suicides.

In a large new study published in the journal Clinical Toxicology, University of Pittsburgh researchers looked at over 90,000 calls involving medications to U.S. poison control centers. They found that calls about gabapentin and the muscle relaxant baclofen increased significantly just as opioid prescriptions began declining.

“Gabapentin and baclofen are two medications that have seen increased availability to patients as alternatives to opioids for the treatment of acute and chronic pain. With greater accessibility, poison center exposures have demonstrated a marked increase in toxic exposures to these two medications,” wrote lead author Kimberly Reynolds of the University of Pittsburgh.

“As poison center data do not represent the totality of cases in the United States, the steep upward trends in reported exposures reflect a much larger problem than the raw numbers would suggest.”

Between 2013 and 2017, calls involving the abuse and misuse of gabapentin went up nearly 120 percent, while reports of baclofen being abused or misused rose nearly 32 percent from 2014 to 2017.

Only 19 deaths involving gabapentin were identified as possible suicides during the five-year study period, but there were thousands of gabapentin-related calls each year coded as attempted suicides — including over 10,000 calls in 2017 alone. 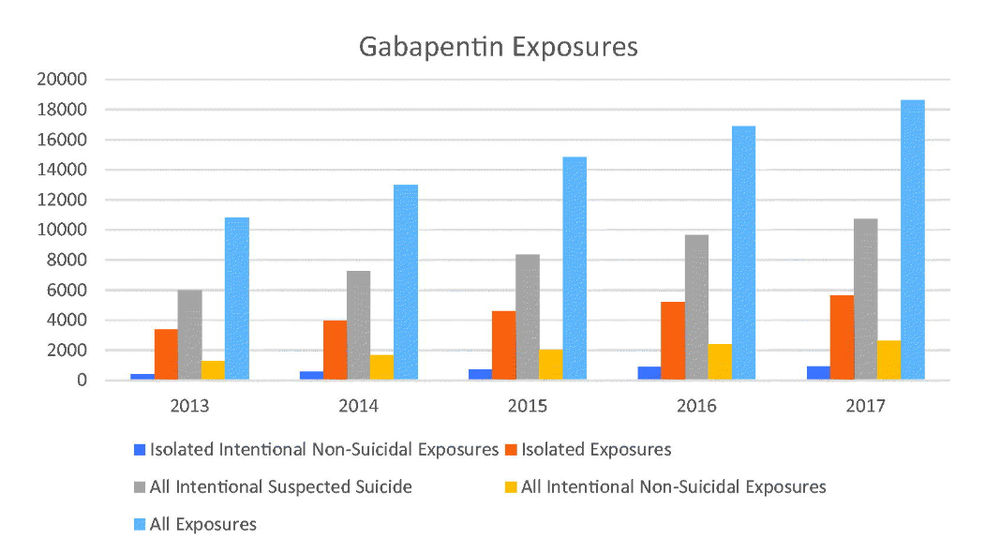 “It would be anticipated that patients who are prescribed gabapentin and/or baclofen would be more likely to be treated for mood disorders and pain as they are frequently comorbid and therapy overlaps significantly,” researchers said.

“Gabapentin has specifically been recognized for its misuse and diversion potential, synergistic effect with opioid use, and contribution to use disorders. Baclofen misuse has not been as frequently described but is anecdotally observed and associated with severe toxicity, physical dependence, and complicated withdrawal.”

The researchers recommend that patients who are prescribed gabapentin or baclofen be prescreened for substance use disorders, mood disorders and suicidal ideation.

Gabapentin (Neurontin) and its chemical cousin pregabalin (Lyrica) belong to a class of nerve medication called gabapentinoids. Both drugs were originally developed to treat seizures, but are now widely prescribed off label to treat a variety of chronic pain conditions.

A recent Swedish study found that patients taking gabapentinoids had higher rates of overdose, suicide and suicidal behavior than the general population. The risks were strongest in teens and young adults.

A recent clinical review found little evidence that gapapentinoids should be used off-label to treat pain and that prescribing guidelines often exaggerate their effectiveness. The CDC’s controversial 2016 opioid guideline, for example, calls gabapentin and pregabalin “first-line drugs” for neuropathic pain.

In a new draft report being funded by the CDC, researchers say gabapentin showed only “small improvements” in pain for people with diabetic peripheral neuropathy and fibromyalgia. The study by the Agency for Healthcare Research and Quality (AHRQ) is expected to finalized in early 2020.